Some protocols that are commonly used: 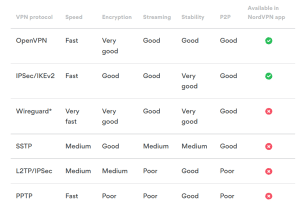 What features are compulsory for best VPN protocol?

What is fastest VPN protocol?

the protocol “wire guard” is considered as fastest protocol, the reason behind this is that it saves a lot of time due to its fast speed of developing connections. there is a protocol “Nor Lynx” by NordVPN couples Wire Guard’s, its quality is  speed with enhanced security. Another protocol considered as fast protocol is “IKEv2/IPsec”.

Is IKEv2/IPsec faster than OpenVPN?

the answer is “yes because Open VPN is more CPU-intensive while IKEv2. While IKEv2 will often be the best option, there are many other elements that impact speed, which depends on more than just the protocol being used.

Which one is most secure VPN protocol?

By multiple experts “”Open VPN” is selected as most secure VPN protocol because it uses 256-bit encryption as a default and also have multiple features like it offers other ciphers such as 3DES (triple data encryption standard), Blowfish, CAST-128, and AES (Advanced Encryption Standard).

E-health Use of technology